I heard this the other day on satellite radio. I can’t tell if I like it or not. 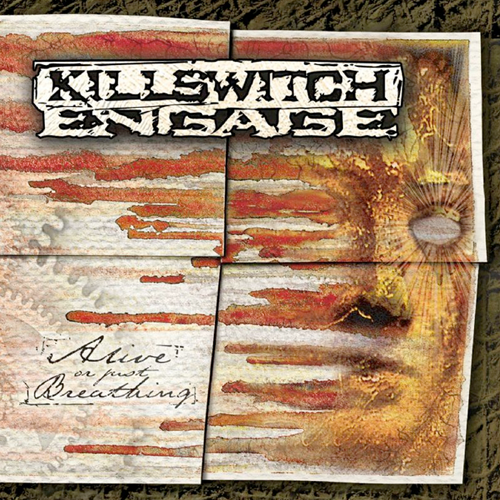 I’ve mentioned before that heavy music has many genres. Some are beyond hard to explain, and some really are simple. In the early 2000’s “METALCORE” landed on the map and a huge statement was made with the release of Alive or Just Breathing. This album is viewed as a defining moment for the genre and was well praised upon its release and to this day. One of the main bright spots of this album are the lyrics. Rather than harp of the negativity of life, the lyrics were aimed to bring a positive message through the music. Musically there is a well woven web of hardcore riffs, thrash riffs, and melodic sensibilities. all these intangibles created a sonically invigorating album. Songs like opener “Numbered Days,” Fixation On The Darkness,” “My Last Serenade,” “Life To Lifeless,” “Just Barely Breathing,” and the fantastic closer “Rise Inside” are all absolute standouts. Actually the entire album start to finish is a gem.

It must be said that Jesse Leach’s vocals on this album are beyond outstanding. His ability to roar then go into such delicate melodic singing is baffling. Guitar wise Adam Dutkiewicz and Joel Stroetzel play off each other extremely well. Each of their tones are just a little bit different, but brought into the mix wonderfully. Mike D’Antonio has a crunchy yet clean bass tone the balances out the clean tones coming from the guitars. The drums on the album were played by Adam Dutkiewicz, and they provide a great back drop for the pace of the songs and the album.

Jesse Leach is one of my favorite singers that have come about in the last 10 years. He really has a unique voice that is passionate and driving. The way he conveys his words in the songs is hypnotic almost. I truly wonder what the next album would have sounded like had Jesse stayed. Thankfully, Jesse is back and their most recent album Disarm The Descent is a powerful statement of his return.

Today just feels like a day for some Silverchair

I thought I’d try something different today. I’ve selected a few songs that I’ve been really into as of late. Some are new and some are old. Enjoy!

Seether- Crash from Isolate and Medicate:

Mastodon (ft Scott Kelly of Neurosis)- Diamonds In The Witch House from Once More Round The Sun:

Down- Conjure from Down IV Part II

Chevelle- Ouija Board from La Gargola

Black Map- I’m Just The Driver from the Driver EP

Abloom- After That Quiet from their 2004 sampler

Nine Inch Nails- Right Where It Belongs from With Teeth 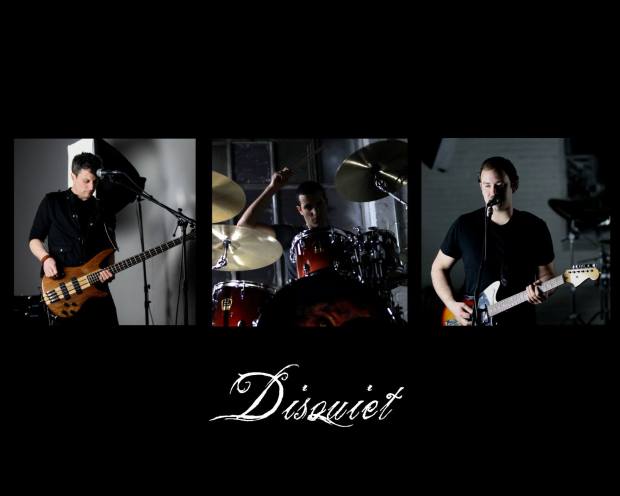 The alternative music scene is flooded by a lot of generic music. To be absolutely honest, it pretty much is terrible. Though amongst the sea of monotony there are a few bright spots. One of those is Massachusetts Disquiet. Combining their influences of Dredg, U2, Kings Of Leon mixed with some art rock and a dash of shoe gaze, Disquiet stands out amongst their peers. 2013 saw the release of their first album, April Distance. This three-piece is comprised of guitarist Derek Juliano, bassist and front man Jonas Boinay, and drummer/percussionist Dirceu De Rossi Pereira. Disquiet has the ability to be both powerful and subtle. They have a real knack for steadfast beats mixed with seductive riffs.

I’ve never been a big fan of Queen. Freddie Mercury is great, but I’be always been annoyed by Brian May. I recently stumbled across this great version of “Bohemian Rhapsody” sung by the very underrated Jimmy Gnecco of Ours. Jimmy has one of the best voices in rock music and his band Ours has always been a very underrated and fantastic band.

It’s often easy to dismiss bands you hear on the radio. Most are just plain generic bands with no substance or truth behind them. For every 10 of those types of bands there is usually 1 in the bunch that really stands out, and defies those standards mentioned above. One of those bands is 10 Years. 10 Years was initially formed in Knoxville, Tennessee in 1999. In 2005 they released their major label debut, The Autumn Effect. The songs “Wasteland” and “Through The Iris” were released as singles and garnered solid radio play. During the album cycle for their debut, they toured with Korn, Sevendust, Deftones, Mudvayne and others. The follow up Division was released in 2008. This album has a different feel to it. Rick Parasher (Pearl Jam Ten) was chosen to produce this album. Some of the members of the band have gone on to say that this was a very difficult album to make, hence the name of the album. Songs like “Beautiful,” So Long, Goodbye,” “Actions and Motives,” are all standouts amongst others like “All Your Lies,” and “Focus” which was co-written by Dean DeLeo of Stone Temple Pilots. Touring saw 10 Years share the stage with  Sevendust, Chevelle, and was apart of the 2008 Projekt Revolution tour. For their third album Feeding The Wolves, Howard Benson was picked to produce (on a personal note, I think Howard Benson’s production is too polished and clean, taking away from the raw feeling of the band). During recording, the band went back and forth between putting on live shows and working on the album. During this time, they debuted a few new songs live, including “Dead in the Water”, “Now is the Time”, and the new album’s first single “Shoot It Out.” Other standouts from the album include “Fix Me” and the epic closer “Fade Into (The Ocean).” When it came time to write a new album, 10 Years had announced that they were leaving their label to become independent again. The result was Minus The Machine, which was their most organic album since The Autumn Effect. It was released on August 7, 2012 through their own independent label called Palehorse Records. Songs such as “Minus The Machine,” “Backlash,” “Knives,” and “Forever Fields (Sowing Season)” are all standouts from the album.  The bands live show has always been full of great energy and true emotion. Listening to singer Jesse Hasek, you can hear in his voice that the words really mean something. Guitar wise Ryan “Tater” Johnson has great ability to play heavy and delicate songs without overplaying. Lewis Cosby plays the bass with enough force to make the low end shine and it balances extremely well with Brian Vodinh’s powerful drums.

10 Years is the real deal. They aren’t your typical radio friendly band. If you wrote them off, give them another listen. They really are a gem amongst a sea of nothings.

In no particular order (wait till the end of the year for that). These are the best albums I’ve heard all year!

1. Mastodon- Once More Round The Sun
2. Every Time I Die- From Parts Unknown
3. Chevelle- La Gargola
4. Seether- Isolate and Medicate
5. Sevendust- Time Travelers and Bonfires
6. Crosses- Crosses
7. Royal Blood- Out Of The Black EP
8. Against Me- Transgender Dysphoria Blues
9. And We Are Them- Align
10. Wild Throne- Blood Maker
11. New Cathedral- Ghost
12. Machines Learning- Machines Learning
13. He Whose Ox Is Gored- Nightshade EP
14. With Our Arms To The Sun- A Far Away Wonder
15. Black Map- Driver EP
16. Royal Blood- Royal Blood
17. The Last Internationale- We Will Reign
18. Wovenwar- Wovenwar
19. And We Are Them- City Of Ghosts
20. Obliterations- Poison Everything
21. Black Map- And We Explode
22. Bush- Man On The Run
23. Slipknot- .5 The Gray Chapter
24. Aeges- Above and Down Below

Soundtracks are a tricky thing to make. Songs have to fit perfectly with each scene. Sometimes the music chosen fits perfectly and becomes the best part of watching certain scenes. One such movie and soundtrack is the first Underworld. The film’s soundtrack was produced by Danny Lohner (former Nine Inch Nails multi instrumentalist). Danny contributed several songs to the soundtrack under his pseudonym Renholder (A Perfect Circles’s song Renholder off Mer De Noms is in reference to Danny Lohner). In addition to contributions from The Dillinger Escape Plan, Puscifer, A Perfect Circle, Page Hamilton of Helmet, and Skinny Puppy, there was a group called The Damning Well, that provided a song for the soundtrack. The Damning Well was a supergroup comprised of Wes Borland (Limp Bizkit), Danny Lohner (Nine Inch Nails), Josh Freese (A Perfect Circle), and Richard Patrick (Filter). Their contribution “Awakening,” was a real highlight of the soundtrack, and left listeners wondering what could’ve become of such a collaboration had they continued. It’s been said that much of the music that they created wound up being used for the first Black Light Burns album. One other song featured on the soundtrack called “Bring Me The Head Of The Disco King” is also a huge highlight. This song features David Bowie, Maynard James Keenan and John Frusciante.

The movie itself wasn’t that great but, there were a couple highlights. Kate Beckinsale and this fantastic soundtrack.

David Bowie and friends: Bring Me The Head Of The Disco King

A Perfect Circle: Weak and Powerless (Tilling My Grave Mix) 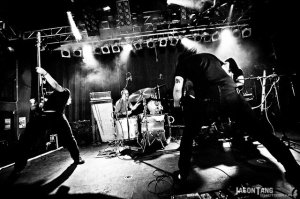 Heavy music has a zillion sub genres ad sometimes it’s hard to keep up with them all. There are a few that have come about recently that really stick out above the rest. In particular doomgaze, which is equal parts doom metal and shoe gaze. One of the bands from that genre that has really grabbed my attention is He Whose Ox Is Gored. This Seattle band was founded by members Brian McClelland (guitar, vocals) and Lisa Mungo (synths, vocals), later joined by current members Mike Sparks (bass, vocals) and John O’Connell (drums). They have been decimating the underground of Seattle since 2009. The technical guitar work and atmospheric synths over walloping rhythms create a uniquely cinematic soundscape that paints a world ready to be thrown to the wolves. Currently He Whose Ox Is Gored is gearing up for a tour to promote their upcoming full length and recently released limited cassette. This band has what it takes to make it in the world of heavy music.