It’s not every day that an album begins with an instrumental track. Most of the time when that occurs it’s a short intro. On Chevelle’s most recent album NIRATIAS (which is a great album by the way and TOOL should thank them for making the album they should’ve), the opening track “Verruckt” really sets the tone for the album to come. The sludgey and stoner/doom riffs that accompany the song are quite engaging. Just when you think the vocals are about to chime in, they go a different direction. There’s a subtle Mastodon prog vibe to this song in parts too mixed with a bit of Tool and Helmet. Chevelle one of the most consistent rock bands of the past 20 years and this album proved it in a big way!

I’ve been contemplating on what to do with certain things as of late in regards to Audioeclectica. I have a giant list of things I want to do and bunch of new topics on the way. The radio show will be making a return soon. I finally found the right person to do the show with. It’s going to be awesome and the playlist for the show is superb. In the meantime before all that happens, I thought it would be quite fun to start putting out playlists for you all to enjoy! So, what you have below is a link to the first Audioeclectica Playlist. On it you’ll find new music by artists/bands you know of and some you might not. If you’ve been keeping up with the articles on Audioeclectica, you will probably recognize a good amount of the bands. So, without anymore delay, here it is!!!

Consistency in rock music is very important. A band can deviate and experiment all they want but, as long as the album or songs don’t stray too far off path their career longevity will for sure continue. Which in the case of Chevelle, consistency is one of the best words to describe them. Since their inception, each album they’ve released has been a solid rock album after another. Some have seen the band try new things and add different elements but, through and through, they’ve always delivered a solid piece of work. So, it’s no surprise that on their new album, NIRATIAS (Nothing Is Real This Is A Simulation), the band stretched their wings a bit more and fully embraced their past, present, and future on this one.

It’s a little strange to start the album off with an instrumental but, “Verruckt” is one hell of a way to start this one off. The hard charging riffs and rhythms are the perfect guide to take you to the absolute banger that is “So Long, Mother Earth.” That track needs to be a single and added to the setlist. Then “Mars Simula” hits you again and there’s nothing left to do but, turn the volume up even more. “Self Destructor” was the first single released and it’s still one hell of a track. It’s very classic “Chevelle” with a bit more of a melodic palette. “Piistol Star (Gravity Heals)” is the song Tool should have released on the snooze fest that is Fear Innoculum. This track is very heavy on the Tool influence but, it’s done in a very tasteful way that makes you wish Tool would write songs like this. “Peach” is another banger of a song and one that will and should be a live staple for years to come. “Endlessly” is an absolute standout on this album. The songwriting on this song is impeccable. Definitely pay close attention to this one. “Remember When” is another hot track on the album with great riffs and a crushing rhythm. “Ghost and Razor” is one of my favorite songs on the album. This track is so damn good. I’m not going to say anything else about this one, just listen to it! Closing out the album is the ambient/piano drive spoken word track “Lost In The Digital Woods.” This is an eerie one but, interesting. It’s a culmination of all the thematic elements that were touched upon through the lyrics and it’s a nice little coda to end things on.

NIRATIAS is one hell of a great heavy rock album. It’s got all the right parts to make this a stand out in the band’s catalog. The underlying conceptual elements on the album make the listening experience quite enjoyable. The interludes help carry the songs over and gives you a moment to reflect on the previous songs. Lyrically this is an expansive album. There’s definitely a science fiction theme to the album with all the mentions of space and time. It makes for an introspective listen and makes you think enough to put the album on again as soon as it’s over. The tones of the instruments and vocals are top notch. Chevelle really found the right producer/engineer in Joe Baressi. His ability to capture the band is astounding. There is something kind of funny about this album too. As I mentioned in the album/song description about Tool, Chevelle has always had a Tool element to their sound. This album does have some straight up moments that are right out of their playbook but, considering how underwhelming the last two Tool albums have been, hearing Chevelle rock go there on certain songs, makes up for that by miles and miles. Chevelle have said too that this is everything they could throw at an album and that it doesn’t do well, they’ll hang up this project for a while. Well, let me tell you, this is one hell of an album and they should be proud of it. It’s definitely one that will be on rotation for a long long while and will be in my top ten at the end of the year.

Chevelle is one of the most under appreciated and underrated bands out there. For over 20 years now, they’ve been one of the most consistent rock bands out there. Now in 2021, Chevelle is gearing up to release their ninth (yes, I said 9th) studio album, Niratias (Out March 5th). The first single and video for “Self Destructor” is out now and it’s a banger for sure. When we can go out and enjoy live music again, I guarantee that when they play this song live, it’s going to kick some major ass. 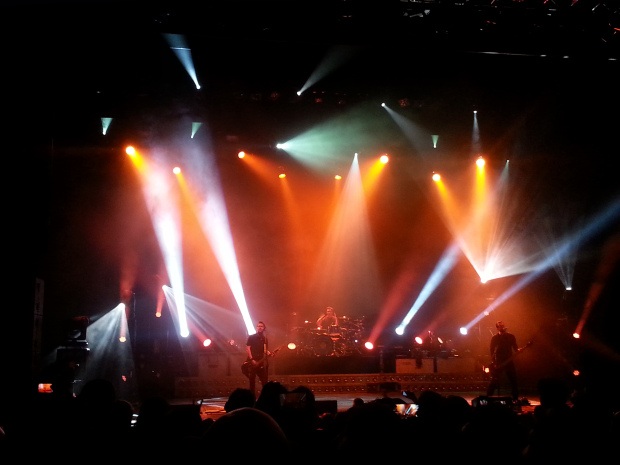 There are bands out there that get a bad rap for no good reason. And the more you really delve into the band’s albums, you realize that said band is quite good and really consistent in releasing quality material. Over the last few years, I’ve personally noticed that the band Chevelle falls into this category of underrated bands. Not only do they release consistently solid albums but, they’ve upped their game on each album. Rather than just stick with a “radio friendly” formula, the three guys in Chevelle, bucked the trend and went on to create what they wanted to.

After their platinum selling second album, Wonder What’s Next, which featured songs like radio staples “The Red” and “Send The Pain Below,” Chevelle realized that they needed to separate themselves from the rest of the bands of that time. Drawing more on their influences of Helmet, Tool, and The Cure, Chevelle managed to carve out their own little niche. Since Wonder What’s Next, Chevelle has been consistent in putting out solid albums. This Type Of Thinking Could Do Us In and Vena Sera, are very melodic and heavy. Sci-Fi Crimes is a bit of an experimental album for them, as they were toying around with bits of prog rock in their new tunes.

When they made Hats Off To The Bull, that’s when they really found their sound and style. Working with producer/engineer Joe Baressi, was the best thing they could have done. Joe not only has a great ear for production but also tones, and structures. Hats Off, while, not the band’s best effort, was the push in the right direction. When it came time to work on their follow up, La Gargola, Chevelle made a statement with that album. Not only is it an “album” but it was sonically bombastic and written so well. It was the perfect album at the right time. Not long after, when it was time to go back in the studio, Chevelle upped the ante by writing their heaviest album to date, The North Corridor. This album is 10 songs of unrelenting syncopated rhythms and a darker tone.

Chevelle are the type of band that deserves the recognition of being one of the best heavy rock bands since the turn of the century. Their catalog represents that as does their live show. I’ve had the pleasure of seeing them in different times of their career, and they have never disappointed. One other thing that makes Chevelle such an underrated band is that they are a great band to recommend to someone that is wanting to get into heavier music but, doesn’t want it to be “too heavy.” Chevelle is and will always be a melodic heavy rock band, and they do it so well.

Give them a chance if you haven’t before. You’ll be surprised at what you missed out on.

This Type Of Thinking Could Do Us In:

Hats Off To The Bull:

I’ve always been intrigued by bands that have 3 or less members. Sure some of them when they play live add members to fill out their sound, but the core remains those three people. So with that in mind here is a list of the best three piece bands. Note This list is in NO PARTICULAR ORDER.

Chevelle has been been one of the most consistent rock bands to come around since their successful album Wonder What’s Next. Throughout their career they have have pretty much stuck to their guns and charged ahead putting out solid rock albums. Here is a ranking of their albums from not their best to their best.

Hats Off To The Bull:

This Type Of Thinking Could Do Us In:

This is not part of the 1st annual Audioeclectica Awards. This is just a list of the top 10 concerts I’ve attended this year.

This weeks top 10 songs to enjoy

1. Abloom- After That Quiet (from Abloom Demos)

2. Chevelle- An Island (from La Gargola)

4. Mastodon- Ember City (from Once More Round The Sun)

9. Incubus- The Warmth (from Make Yourself)

10. Down- Nothing In Return (from Down III: Over The Under)

I thought I’d try something different today. I’ve selected a few songs that I’ve been really into as of late. Some are new and some are old. Enjoy!

Seether- Crash from Isolate and Medicate:

Mastodon (ft Scott Kelly of Neurosis)- Diamonds In The Witch House from Once More Round The Sun:

Down- Conjure from Down IV Part II

Chevelle- Ouija Board from La Gargola

Black Map- I’m Just The Driver from the Driver EP

Abloom- After That Quiet from their 2004 sampler

Nine Inch Nails- Right Where It Belongs from With Teeth