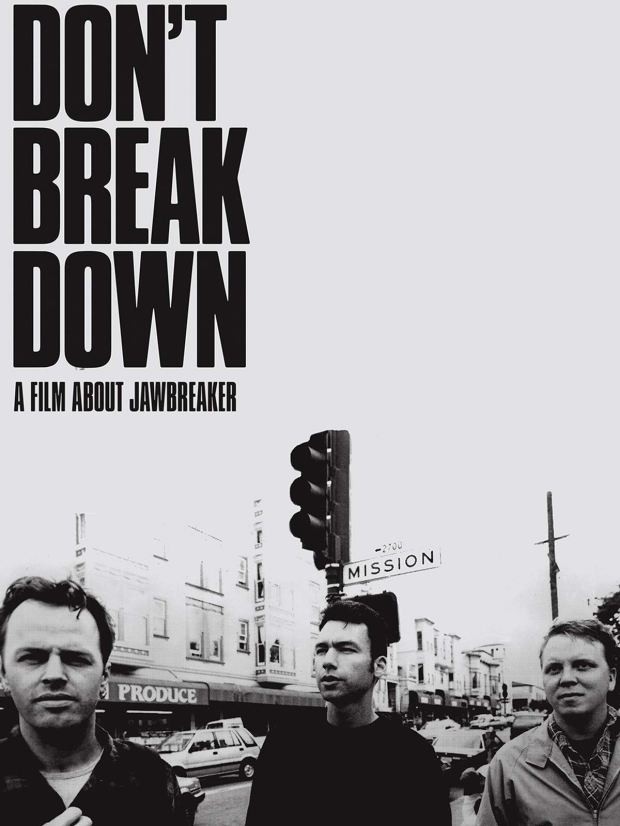 I love music documentaries. There is something truly great about getting to find out things about bands you love and band’s you haven’t heard of. The idea of breaking down the mystique at times can be a little unsettling because you don’t want to be let down but, when you get someone in the band to open up just a little, you begin to experience the band on a whole different level. The best part is after you are done watching the documentary, the appreciation that it leaves you with often tends to inspire and push you to create. Recently, I finally saw the long awaited documentary on Jawbreaker and its was pretty fantastic.

Don’t Break Down is the story of Jawbreaker’s rise and fall and rise (well more like a re-emergence) again. This doc is quite interesting as it was originally set up around the idea of the three band members (Blake Schwarzenbach, Chris Bauermeister, and Adam Pfahler) coming back together at a studio to listen back to their records and reminisce a bit. What we get though is a somewhat deep look into the tensions and talents that made Jawbreaker great, but also tore them apart.

I don’t want to give anything away because this is quite a very interesting documentary to watch. The doc shows and gets into the beginnings of the band and most of the bands history. The interviews with the members (and others including friends and industry folks) are quite fascinating, as they delve into the history of the band and start to come out of their shells a bit. Something else happens to the viewer while watching this, you start to really wonder why Jawbreaker wasn’t one of the biggest bands in scene at the time. They had (and still do) the talent, songs, show, and passion for this, it’s just a shame that it all went the way it did.
I’ve watched Don’t Break Down a few times now and have found it engaging each time. You get a bit of a peek into the songwriting and how they created their records, also you get a pretty big glimpse into the band drama and tension, and the ending, is pretty damn great. One of the biggest things about Don’t Break Down is that much of the mystery of the band remains and that curtain is never drawn back.

Jawbreaker Don’t Break Down is available to stream on Amazon Prime!!