Moon Tooth is a band that you NEED to know about. There are no if’s and’s or but’s about it. These guys straight up rock. It’s not everyday that a band comes out as strong as they did on their debut album “Chromaparagon,” then follows it up with an album that not only out does their previous effort but, also solidifies them as a force to be reckoned with.

From the moment the first song “Trust” begins with that hard charging riff and pummeling rhythm, it’s game on. An opening track like that not only gets the blood pumping but also sets up the album perfectly for what’s to come. As the album continues, songs like “Omega Days” and “Musketeers” branch out into a proggy atmosphere that is drenched in melody. “Through Ash” and “Motionless In Sky” (which as of this writing are my favorite songs on the album),  are songs that really show off what a great vocalist John Carbone is and what great songwriters the band is as a whole. Other songs like “Thorns,” “Rhythm & Roar,” and “Thumb Spike” are stellar tracks that deliver punch after punch. Then you have a song like “Awe At All Angles” that shows off a different side of the band while at the same time completely fits in the spectrum of the rest of the songs. There is one song in particular that really stood out and that is the title track “Crux,” I’ve long said that title tracks have a tendency to sum up what the album is about and this song is just that. “Crux has all the elements that Moon Tooth brought to the table on this record and delivered it in epic fashion. I’m not even going to tell you how, you just have to listen. Closing out the album is “Raise A Light” a song that like the others on the record, delivers the goods and leaves the album with a sense of closure while at the same time open ended for what’s to come on the next release.

Crux is truly a work of art. The balance of the different genres from rock, metal, prog, jazz and blues really work and compliment each other. The performances from each member are exquisite. Guitarist Nick Lee is a talent for sure. It’s hard to believe at times while listening, that he’s the only guitarist in the band. It’s like he’s got eight extra arms to pull off some of what he’s playing. The rhythm section of drummer Ray Marte and bassist Vincent Romanelli is outstanding. Not only are they super tight but they really compliment each other well. John Carbone has a voice that is soaring and melodic. The passion that is emitted from him and the rest of the band shows through on each and every song. The tenacity and strength of Moon Tooth shines on Crux. This is an album that will be in many top lists at the end of the year. It’s that good. Crux is a complete album from start to finish and deserves to be played that way to get the full experience. Moon Tooth are about to sink their teeth in and rightfully take a bite of their own.

Awe At All Angles:

On a clear Monday night in Los Angeles, at the legendary Roxy on Sunset, three bands, each with their own style, left an imprint on this fabled street and venue. Those in attendance (and there were quite a few, especially on a Monday), were witness to one hell of an energetic evening of heavy music. Led by headliner Mark Morton along with Light The Torch and up and comers Moon Tooth, there was no stopping the train of heavy from decimating the Roxy.

Opening up the evening was Moon Tooth. Ever since I heard of them a few months back, I’ve been highly intrigued by them. Their blend of heavy and psychedelia mixed with bits of prog and jazz makes them one of the most exciting new bands to come along in a while. Their second album Crux (which comes out Friday March 29), is one hell of a record and it most definitely will be at top ten album of the year. Every minute of their set was absolutely on fire. As they ripped through new songs like “Trust,” “Omega Days,” and “Awe At All Angles,” there was no question that these four gents are primed for something great. Each member from Nick Lee (Guitar/Vocals), John Carbone (Vocals), Ray Marte (Drums/Vocals), and Vin Romanelli (Bass), really gave it everything for each song. Personally I was kind of bummed their set ended. I really wanted more. Moon Tooth really got the crowd going and delivered a performance that when they are headlining their own shows, will be talked about for some time. 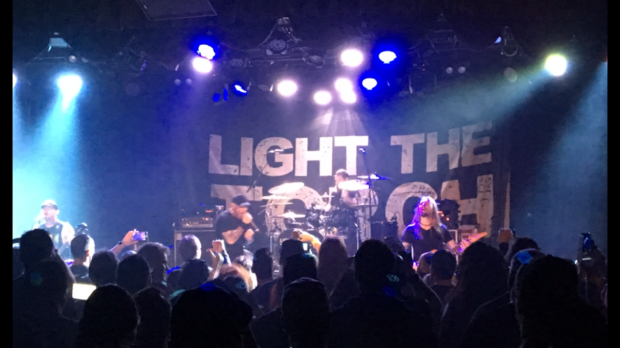 The middle slot of the night belonged to Light The Torch (formerly Devil You Know) and they brought the thunder with them. As the lights dimmed down, the frenzied crowd lost their shit when singer Howard Jones took the stage. For the next hour, Light The Torch, riding high off their new album, Revival, Howard Jones along with Francisco Artusato (Guitar), Ryan Wombacher (Bass/Vocals) and Mike Sciulara (Drums) delivered a set that was inspiring and crushing. Playing songs like “Die Alone,” “Calm Before The Storm,” “The Bitter End,” “The God I Deserve,” and “The Safety Of Disbelief,” there was no doubt on anyone’s mind that Light The Torch are here to stay. One of the best parts of their performance was the interaction between Howard and the crowd. It’s clear that Howard is a favorite among many people. His time in Killswitch Engage was something special and getting Howard back doing what he is meant to do is just great. Light The Torch are primed for a take over and rightfully so. 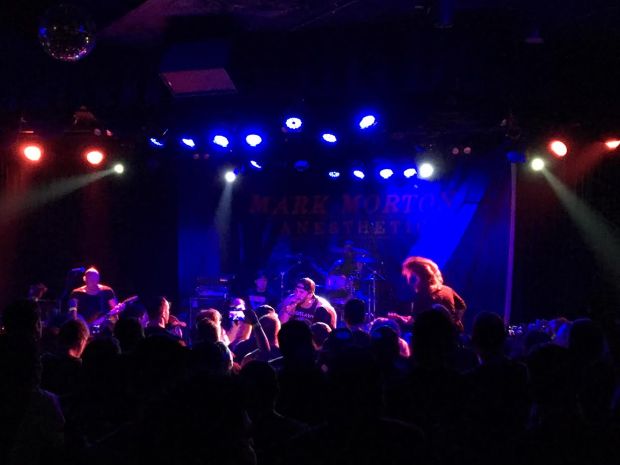 The main event of the evening belonged to Mark Morton of Lamb Of God. His debut solo album, Anesthetic, is a departure from what most fans of Lamb Of God are used to. This evening though showcased what a talented songwriter Mark is as well as solidifying his status as a modern day guitar hero. For this tour Mark recruited drummer Art Cruz (Prong, Winds Of Plague and Chris Adler’s fill in for Lamb Of God), guitarist Doc Coyle (God Forbid, Bad Wolves) and Sons Of Texas members Mark Morales on vocals (who also sang the song “Blur” on the record) and Nick Villarreal on bass. This lineup along with Mark on lead guitar stormed through their set with vigor and passion. The songs on the album feature a diverse style of songs ranging from super heavy like “The Truth Is Dead” and “The Never” to more rock styles like “Cross Off,” “Sworn Apart,” “Save Defiance,” “Blur,” and “Imaginary Days.” The best songs though are the total curve balls like “Axis” and “Reveal” which truly show how good Mark Morton really is. The performances of these songs were right on target. Mark Morales did a stellar job handling the vocal duties for all these songs. The tandem guitars of Morton and Coyle were spot on and the pounding and thunderous rhythm of Cruz and Villarreal was right in the pocket. They even had a couple special guests joining them on stage. Naeemah Maddox was brought up to sing her song “Reveal” as well as staying on stage to perform “The Truth Is Dead” with Roy Mayorga (Stone Sour, Soulfly, Abloom, etc) pounding the drums.

What a great night for every band on the bill. Each band was different and brought an energy that carried on to the next. It’s shows and tours like this that get people excited and want to go see live music. Not only was that a great show but, it was a great way to start the week. I know I’ll be replaying the show in my head for sometime, especially Moon Tooth. I can’t wait for them to come through town again. And a special shout out to Heavy Grass for making it happen for me to attend this great show!

Review and Shots By: Brian Lacy

(I was too into the show to take many pictures).

The band I’m presenting to you this week is going to rock your world. They are heavy, aggressive, progressive and absolutely badass. I’d like to introduce you all to your new favorite band, Moon Tooth. Straight up, these guys are awesome. The four members of Moon Tooth, John Carbone (vocals), Nick Lee (guitars), Vincent Romanelli (bass) and Ray Marte (drums) are not only are they masters of their instruments and rip and shred but, their ability to write great songs makes them truly standout. They remind me a bit of Mastodon meets The Dillinger Escape Plan with a ton of melody and 70’s prog. Their 2016 debut album, Chromaparagon is pretty damn great from start to finish. I could use many adjectives to describe how good it is but, you should just listen and you’ll understand why Moon Tooth is great. Now in 2019, Moon Tooth is gearing up to unleash a new album entitled Crux (out March 29th). The first single released, “Trust” is the logical next step for the band and it crushes. The band worked with Lamb of God’s Mark Morton and producer Machine (Lamb Of God, Every Time I Die, King Crimson, etc) on Crux. Speaking on the new album singer John Carbone said “This album is about not giving up. It’s about the furious hope that brings fighters back to their feet again and again. Having answered the call to adventure, having grappled with what will surely be only the first set of trials, having sacrificed and lost so much, ‘Crux’ finds the band at a tipping point. There is nothing left but for the old life to die and the new, true life to begin.” A description like that shows that Moon Tooth are creating lasting music and albums with depth and true artistic expression. Personally, I’m stoked on Moon Tooth and can’t wait for this album and them to tour.

Tour Dates with Mark Morton and Light The Torch: