As they prepare for the release of their collaborative new album— featuring Chelsea Wolfe, Ben Chisholm and Stephen Brodsky, Converge have unveiled the second single from Bloodmoon: I, “Coil.” Speaking on the song, Jacob Bannon comments, “’Coil’ turned out to be one of my favorite songs I’ve ever been a part of. There is an infectious slow build that ends up becoming theatrical in tone. Lyrically it was a true collaboration, with all of us expanding on each other’s ideas as they came to be. I believe Chelsea’s vocal was the starting point in that for this one. Kurt really pushed vocal harmonies to a new level as well. Encouraging many of Steve’s ideas while we were in the studio tracking together. This one really has everyone of us firing on all cylinders creatively.” When you hear this song, you’ll get it. It’s such a tremendous track. I personally can’t wait for this album. Ever since they performed at Roadburn I’ve been waiting for this to finally come to fruition. Bloodmoon: I, out November 19th on CD/Digital and on Vinyl June 24th.

2021 marks the 20th anniversary of Converge’s astounding album, Jane Doe. This was the bands first album with bassist Nate Newton and drummer Ben Koller, as well as the bands first with guitarist Kurt Ballou behind the board. This album not only put Converge on the map it was a commercial breakthrough and received immediate acclaim, with critics praising its poetic lyrics, dynamics, ferocity and production. Through the years this album has gone on to inspire and influence countless bands. The intensity on this album is often copied but you can’t match the original. The title track on the album is quite interesting. Singer Jacob Bannon stated in an interview that many of the songs on Jane Doe came from the side project Supermachiner. That project was claimed to inspire Jane Doe‘s experimental side.The title track “Jane Doe” as well as “Phoenix in Flight” were initially intended for the Supermachiner album Rise of the Great Machine. I personally remember hearing this album for the first time. A friend recommended I check it out. At first I wasn’t too into it but, I opened up the booklet, put on some headphones listened again and read the lyrics as the album played and it all made sense. This album is an absolute modern masterpiece. The title track is epic and ahead of its time! Converge is a force to be reckoned with any day of the week.

Alternate versions are quite fun to dive into. They give you a different experience from the original version. And sometimes, these versions turn out better than what you heard first. Converge have released a new version of their song “Aimless Arrow” entitled “Endless Arrow.” This version was created by the bands guitarist Kurt Ballou and is a 30 minute experimental/ambient version of the song. “Aimless Arrow” originally appeared on the bands 2012 album All We Love We Leave Behind. This new version was created “To keep people entertained in these challenging times.” It’s definitely a different take on the song. Personally, I’d be interested to hear them do this with a few other tracks of theirs and maybe even expand this into their Blood Moon project as well.

June 7th is only a few weeks away, and that is when we get the new (and final?) Cave In album Final Transmission. Today, they have released another new song entitled “Shake My Blood.” This new song is a pretty deep and heavy track. It also has a sort of Jupiter feel to it. Granted there have only been two songs released so far, this one and “All Illusion” but, I can already sense that this album is going to be one of the best albums of the year and be in constant rotation for a long time to come.
Pre-Order the album HERE

Cave In- Shake My Blood:

Cave In- All Illusion: 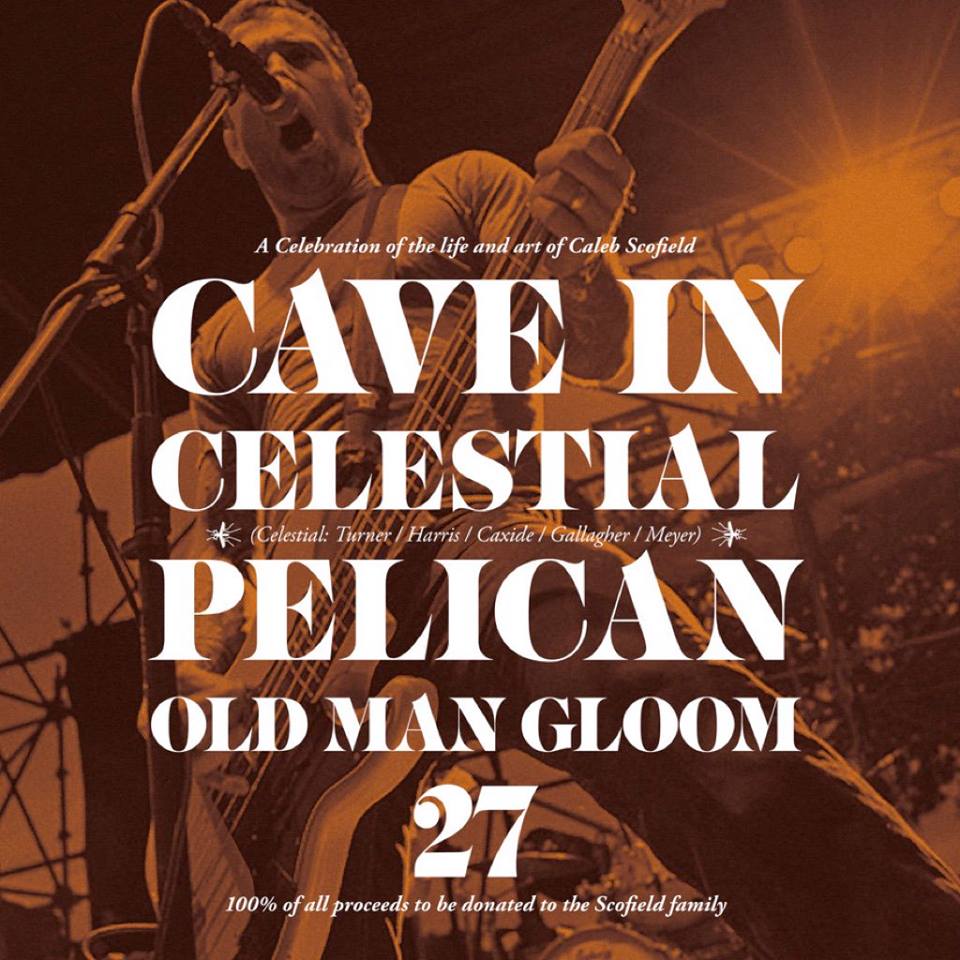 This is not a review, rather this is a recap of this magical show. Back in March of this year, Cave In bassist Caleb Scofield was tragically killed in a car accident. Since his passing, his peers have come together to raise funds for his family as well as celebrate Caleb’s legacy. This past evening at The Wiltern, the second tribute show to celebrate Caleb happened and it was something special.

END_OF_DOCUMENT_TOKEN_TO_BE_REPLACED

Five years have come and gone since Converge‘s last epic album All We Love We Leave Behind. In those five years, there seems to be no signs of any member of Converge losing their “edge” or desire to push themselves creatively. On their new album The Dusk In Us, Converge takes a bunch of stylistic chances and they all pay off. For a band that has constantly set the bar for this style of music, it definitely doesn’t come as a shock that they are willing to experiment musically, vocally and lyrically to make the best album they can.

The moment the album begins with “A Single Tear” it shows that there are no signs of Converge slowing down. The riff alone will cause you to stir and move. There are songs on the album that are reminiscent of classic style Converge like “Eye Of The Quarrel,” “Under Duress,” “Broken By Light,” and “Cannibals.” Then there are some truly epic songs like “I Can Tell You About Pain,” the title track “The Dusk In Us.” The more experimental songs like “Murk and Marrow,” and especially “Thousands Of Miles Between Us,”  and closing song “Reptilian,” show that Converge still has grown over the years but also they have a maturity about them that is often overlooked.

Converge has always done things their way and it’s because of that, that they are highly regarded as highly influential and originators of this style of heavy music. Vocalist/lyricist Jacob Bannon has really spread his wings on this album. Lyrically this is some of his best work and vocally he shows he’s got more that just a guttural scream. Guitarist Kurt Ballou continues to impress with his unique style and impactful riffage. Drummer Ben Koller is an absolute beast and he is fully unleashed on this album. Finally bassist Nate Newton has really come into his own and is showcased more on this album. By Nate adding vocals to the songs, it makes them stand out and his own playing has never sounded better.

The Dusk In Us is one of the best pieces of work Converge has put out. It’s pretty crazy to think that as these guys get older they only get better. Something else about this album that is quite interesting is that Converge still has songs left over that didn’t make the album. One of those songs “Eve” is probably one of the best songs the band has ever written. Do yourself a favor and delve into The Dusk In Us and explore a side of you that you didn’t think existed. You will be quite surprised with how much you enjoy this.

Converge- The Dusk In Us:

Over the years, Converge has established themselves as an influential and underrated band. Musically, they are powerful and enigmatic. Vocally and lyrically they are passionate and ferocious. The entire package of the band is approached with a “take no prisoners” type of attitude and it shows in every album they’ve released. Converge are also one of the few bands that seem to get better and better as time goes on just like a fine wine. Recently, Converge released two new songs to wet the appetite of their fans and those two songs are full of what you’d want from Converge. So, with all that in mind here is a ranking of their albums from not their best to the best.

Halo In A Haystack:

All We Love We Leave Behind:

Today, Converge premiered two new tracks online from their upcoming 7″ single,“I Can Tell You About Pain” The two songs released “I Can Tell You About Pain” and “Eve” are pretty classic sounding Converge. “Eve” is one of the most epic songs the band has put out. It almost could have been on Axe To Fall, with the vibe that it puts out.  You can also pre-order the 7″ edition of the aforementioned EP via deathwishinc.com.  There are still plans for Converge to release a new album later this year. In the meantime, check out the two new songs below!

Converge- I Can Tell You About Pain: