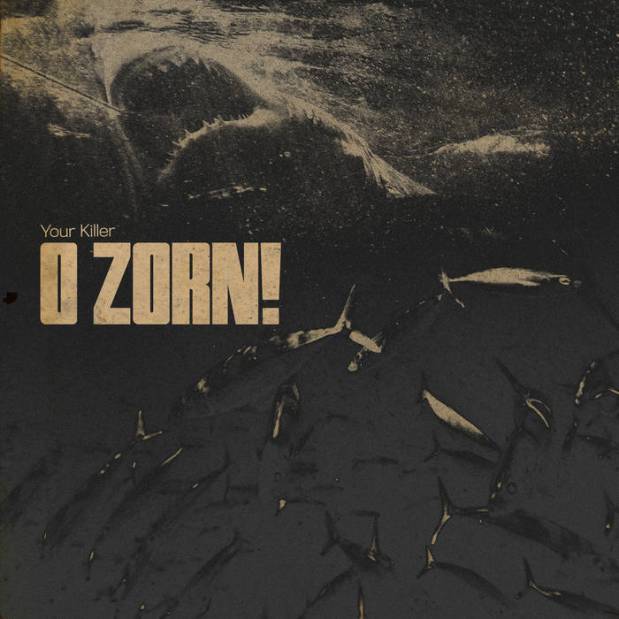 There have been so many great three piece bands over the years and it never ceases to amaze me the power of what a three piece band can emit. Recently I came across a three piece band that is putting out some serious heavy grooves along with a pummeling sound and I couldn’t wait to share them with you all. Let me introduce you to O Zorn. Armed with a sound that is part stoner/doom, sludgey and noise rock, it comes as no shock that O Zorn is going to deliver a decimating sound. Their new album, Your Killer, was recorded at Dave Grohl’s Studio 606. That along with the riffs of both Bill Kielty and Bill Meyer and the unstoppable carnage that drummer Danny Walker brings to the rhythm, has made O Zorn a force to be reckoned with in the heavy music community. Your Killer is out March 20 (via Seeing Red Records). In the mean time, check out these two songs from this upcoming “killer” of an album.

If you haven’t noticed I have an obsession with music. One of my absolute favorite things to do is just sit with headphones on and listen to music. There is something remarkable about letting the music waft over you and take you on a journey. There is a band I’ve been listening to for a couple years now, that really has honed in on making classic albums. That band is Pallbearer. Their music is bits of doom metal, and 70’s rock. It’s the perfect combination of Black Sabbath and Presence era Led Zeppelin.

Pallbearer have released 3 full length albums and 2 E.P.’s since their inception in 2008. Their debut album Sorrow and Extinction was highly regarded by critics, with some even saying it was the best “metal” album of the year. That album is truly a great album for sure. Their follow up Foundations of Burden is another great example of their ability to craft great songs, and expand upon their sound. Their new album though, Heartless, is a genuine masterpiece. Rather than be complacent in their ways, Pallbearer really went for it on this album. There is a great sense of depth and emotion throughout this album. Not to say that their previous albums lacked that but, Heartless just really hits you in all the right places.

With a repertoire like Pallbearer’s it’s no wonder why they are beloved by so many. I personally am loving the way Pallbearer has evolved their sound with each album. They’ve really found their niche amongst their peers, and made it their own. I highly recommend you taking some time and escaping to one of their albums. You’ll really enjoy what you are about to hear. This is the way albums should feel! 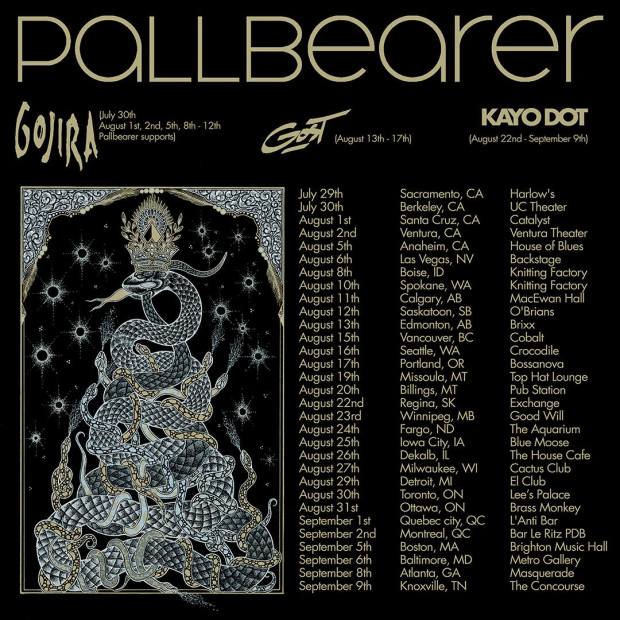 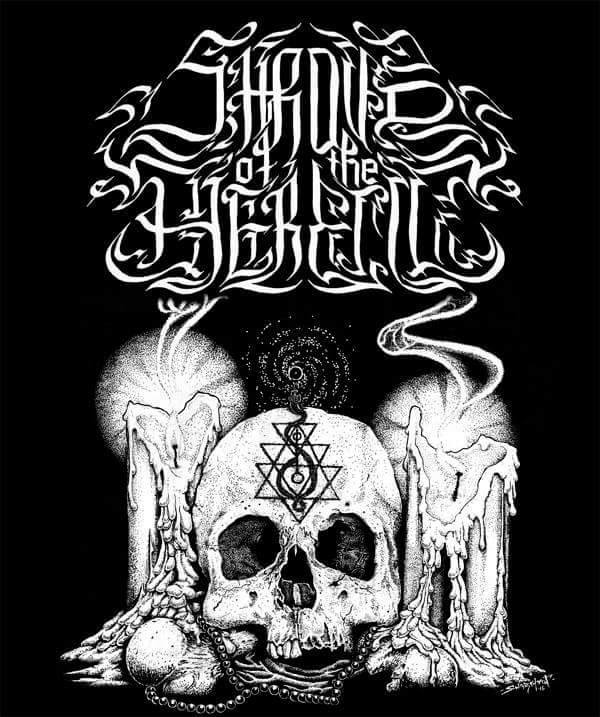 When I listen to heavy/extreme music one of the things that really gets my attention are the lyrics and rhythms. There is something truly hypnotic about a pummeling drum beat that hits you the right way. It’s as though that beat puts you in “the zone” and allows the listener to become engrossed by the waves of music coming at you. There is a band from Portland, Oregon called Shroud Of The Heretic that combines the ferociousness of death metal and the subtle undertones of doom metal. The lyrics touch on different topics such as mythology, the elements, and mysticism, providing an extra layer of darkness to their already heavy tones. The rhythm section of vocalist/bassist Thom and drummer Lauren is bursting with thunder and drive that makes you feel the intensity that is walloping in your ears. Their most recent album Unorthodox Equilibrium is a profound statement on where you can take death metal. Portland has quite the band on their hands with Shroud Of The Heretic. Take a closer look at this band!

Shroud Of The Heretic- Unorthodox Equilibrium: 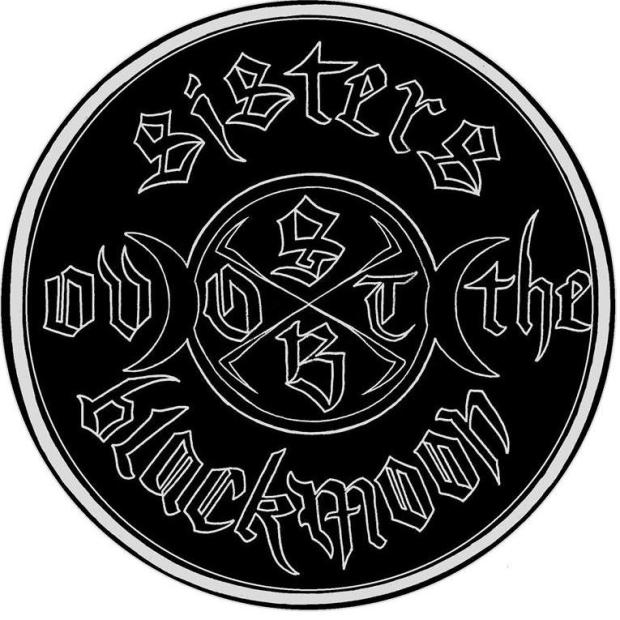 Los Angeles’s Sisters Ov The Blackmoon is what you get when you add parts of doom metal, blues, and straight up rock n roll. This band is well thought out and crafted with great melodies, rhythms, and vocals that are raw and powerful. One can tell from listening to this band that the passion is oozing from each of members into their instruments and the songs they write. There are moments Sisters Ov The Blackmoon remind me of Royal Thunder especially in the vocals, and that’s a good thing. As a music fan I want to hear the vulnerability and spirit from those in the band, and they surely deliver the goods exponentially. Sisters Ov The Blackmoon are one of those bands that should be on your radar, as they are on mine!

The Portland music scene is getting bigger as time goes on. Stoner/Doom metal in particular is growing by leaps and bounds. Young Hunter is one of those bands that has the elements of stoner/doom but adds something else to the mix. Their use of 70’s psychedelia really makes their music stand out. There are some comparisons to Torche and Black Mountain in the way their music sounds. Their recent EP Embers At The Foot Of Dark Mountain is soothing and seductive all the while being powerful. One can tell by listening that the members of Young Hunter really have a feel for what they create.

Creating something epic is no easy task. The dedication it takes to create music with so many moving parts and to be able to connect the lyrics to match is over whelming at times. Luckily there are a few bands that have been able to do that and make it look easy, Neurosis and Isis for example. Destroy Judas is one of those bands. Combining their influences of doom metal, ambient noise, and crust punk, they have created a very deep and thought evoking band. Their debut Wake is full of just what I described. At times it might be construed as depressing but in the most positive of ways. There is a connection between the music and lyrics that really sits well beneath your skin. The drums and bass create a rhythmic foundation that sways and can be earth shattering. The guitars can go from the most subtle sounds to pummeling. The ambient touches really add a dark element that is mixed in perfectly. Vocally the prowess of the growls and soft cleans help guide along the epic nature. The four tracks on the album are all in that vein and unrelenting. The journey that Destroy Judas takes you on is powerful and epic.