Ever since the news broke that Taylor Hawkins of the Foo Fighters died I’ve gone back through their catalog and marveled at some of the songs that Taylor played on. He was an absolute beast on the drums. There are certain songs I heard during this delve that hit me in different ways. One song that really got me (and is actually a top 5 favorite Foo’s song) is “Come Back” the last song on their great album, One By One. This track is epic, heavy, melodic, dynamic in all the right places and the one thing that really sells it is the drum performance by Taylor. He really nailed this one. If I had to pick a Foo’s song that shows off his dynamic range as a player and power I’d go for this one instantly. It’s so damn good I can’t get enough of listening to it. Interestingly this song was only ever played live once in 2002. Taylor Hawkins you will be missed greatly. The couple times I met him he was a super nice guy and took time to chat for a few minutes.

While I was thinking of what to write about over the weekend for Monday, I came up with an idea. It’s definitely going to be a fun one and it will allow you to further delve into some songs and artists/players you might not have normally listened to. The first one I’d like to get into is the collaboration between the Foo Fighters and Joe Walsh from the Foo’s album Sonic Highways. On that album, the two collaborated on a song (the best song on the album by far too) called “Outside.” Joe Walsh is such an integral part of any band or appearance he’s ever been a part of. There is a way to how he plays and his overall vibe and style, that just makes those songs and bands great. This song is no different. His minimalist guitar solo truly sets a mood and as you listen to the song and the lyrics, you really understand why Dave Grohl had asked Joe to guest on the song. It’s one of those perfect collaborations.

Foo Fighters- Making of Outside (from Sonic Highways DVD):

Redemption is the first word that comes to mind when talking about the new Foo Fighters album Concrete and Gold. The follow up to the highly disappointing Sonic Highways is everything you’d want in a Foo Fighters album. It has the rock, the great mid tempo songs, and the delicate melodies that we’ve all grown to love and enjoy in a Foo’s album. Concrete and Gold is also seething in inspiration from 70’s rock bands and their albums from that era. Dave Grohl and company deliver the goods and then some. From the riffs, melodies, and all around vibe this album emits, you are in for quite a treat.

As “T-Shirt” begins the album in a way that is reminiscent of “Doll” from The Colour and The Shape, the way the song flows perfectly into the high energy “Run” is undeniable. Not to mention that “Run” is the classic Foo’s song that was very much needed. Plus the video is hilarious. “Make It Right” is a solid mid tempo song that fits in the sequence of the album and also features guest vocals from Justin Timberlake. “The Sky Is A Neighborhood” will be a classic for the band, no doubt about it. Everything about this song is great. “La Dee Da” is one of my favorite songs on the album. The fuzzy bass line (courtesy of the underrated Nate Mendel) that starts the song immediately grabs your attention and the rest of the song rocks your socks off. Allison Mosshart from The Kills guests on this song as well as “The Sky Is A Neighborhood.” Saxophone player Dave Koz lends his sax talents to the song as well. “Dirty Water” is one of those Foo’s songs with delicate melodies and a softer vibe. It’s another one of those songs that in the context of the album it really fits but as a stand alone song, not so much. “Arrows” is one of those songs that really emits the 70’s sound. The guitar work on this song from Chris Shiflett is stellar. The entire band sounds amazing on this song. “Happily Ever After (Zero Hour) seems a little out of place at first listen but, as you keep listening to the album, this song really grows on you especially because of the lyrics. “Sunday Rain” is another of my favorite songs on the record. This song features drummer Taylor Hawkins on lead vocals and he sounds absolutely great. It’s a great change of pace for the band plus this song just rocks. Paul McCartney plays drums on this song too. There is a cool funk vibe on this song that plays into my thought’s of the 70’s influence but, there is also a kind of George Harrison element to it as well from his All Things Must Pass solo album (an album that is truly a masterpiece… George was the most talented Beatle… I dare you to challenge me on that!). Keyboardist Rami Jaffee really shines on this song as well. His contributions to the song really bring out the “vibe.” “The Line” is a classic Foo’s rock song but with a more melodic twist. Having three guitarists in the band really shows on this song. You can really hear each of Dave’s, Chris’s and Pat’s style and tone on this song. Closing out the album is the title track “Concrete and Gold.” This song oozes Pink Floyd and Black Sabbath.  Not only is this song a great closer but, it’s also epic in the way it plays out and makes you feel. Surprisingly the “choir like” vocals are provided by Boyz II Men’s Shawn Stockman, and it fits perfectly.

Concrete and Gold is the album the Foo Fighters not only needed to make but also an album the rock world needs. Dave Grohl proves that he is one of this generations best songwriters and the entire band, Taylor, Chris, Nate, Pat and Rami play their asses off on the record. Besides One By One and Wasting Light, I’d dare say this is the most complete Foo Fighters record they have ever released. Thank you Foo Fighters for this album and redeeming yourselves and then some. I can’t wait to hear these songs live. Rock isn’t dead. In fact it’s beyond alive and well!

It’s been a few years since we last heard new music from the Foo Fighters. Their failed experiment, Sonic Highways, was pretty bad. The Saint Cecilia EP they put out not long after Sonic Highways, was a step back in the right direction. Today, Dave Grohl and company released “Run,” a very awesome new track that rocks on all levels. The video is fantastic and hilarious as well as directed by Dave. If this is the direction the Foos are going on their new album, then we have something to really look forward to. 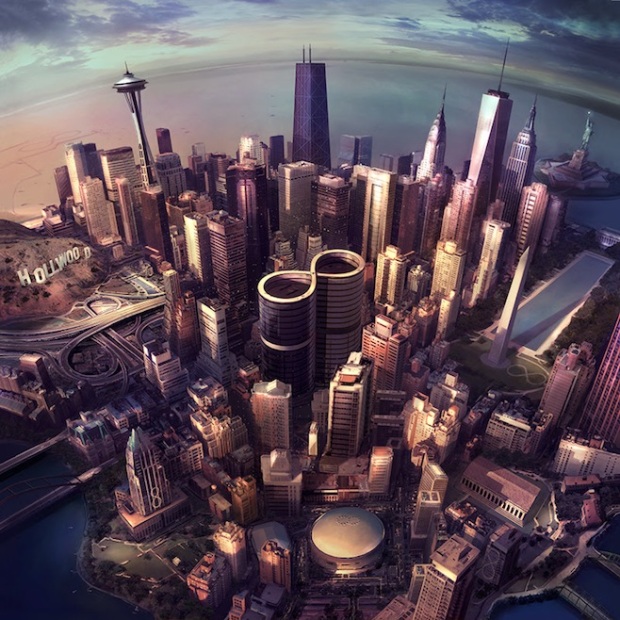 When a band reaches a certain point in their career it’s hard to keep things fresh and inspired. For the bands eighth album the gents in the Foo Fighters tried something different. While the idea is a great one, the final product falls a bit flat. The idea of recording a song in a different city is a great idea. Lyrically it just falls flat. The songs feel rushed and incomplete. It’s as though the thoughts were unfinished. The show on HBO is quite interesting and full of a rich musical history. In my opinion the show is way better than the album. The albums eight songs are very hit and miss. The best song I heard on the album is a song called “Outside” which features the great Joe Walsh. This is the best song on the album hands down. This album is very disjointed and not an “album.”  It’s a collection of single songs, that have no cohesiveness. Also the use of Butch Vig as a producer I think was the wrong choice. His input and methods just don’t work for what the band was trying to do, Nick Raskulinecz would have been the perfect choice. The first song “Something From Nothing” is a good track but nothing special. The whole record is nothing special. In fact I’d probably put this album towards the bottom of the list of ranking their albums. I truly thought that after how good Wasting Light was they would continue on a path similar to how that album turned out. Nice try on this one Foos.