In today’s musical world, there are a plethora of choices and at times, it’s hard to keep up with it all. So many bands get overlooked because of that too, which is a shame, because there are so many hidden gems. Over the past year, there has been one band that’s been on my radar thanks to a couple friends who were raving about them. That band is Loathe. This U.K. based band has developed a style since their formation in 2014 that is part metalcore (Poison The Well’s You Come Before You comes to mind) and progressive rock, mixed in a bit of cool ambience and a dash of nu-metal (more so Deftones Around The Fur/White Pony era). The end result has really helped to craft something interesting and when you listen, it has this really natural ebb and flow. Their new album, I Let It In And It Took Everything, is absolutely superb. It’s a culmination of everything the band has done before but, this is a whole other level. The music has a very cool rhythmic groove that is at times “djenty” but the way it is accompanied by some really cool shoegazey vocals, gives it more of a distinct vibe to separate them from the pack. Of course there are the bellowing screams that take the songs to a different level at times.  I Let It In And It Took Everything is an album that sounds modern and artistic without relying on a nostalgic factor. Yes, there are moments where the Deftones influence is worn brightly on their sleeves but, it’s not distracting from the overall experience of what you are listening to. Loathe are the right band at the right time. This is just the beginning for what this band is capable of. I’d say within the next album or two they will truly find their own niche and the album that comes from that, will be their White Pony.

Loathe- I Let It In And It Took Everything:

A couple months back a friend of mine suggested I take a listen to something. He wouldn’t tell me who it was until a few of the songs were over. As the final song finished, he asked what I thought. I said that was pretty cool and that I bet whoever it was would be pretty rad to see live as well. A couple minutes passed and he then told me it was this band Ho99o9 (aka Horror). I had heard the name before but never heard the music. At that point I sought out obtaining the album that he played me and I was sold. The album in question was United States Of Horror, which is also the bands debut studio album. Ho99o9 is a group that combines elements of hip hop, industrial, hardcore, and trip hop. Since their inception in 2012, Ho99o9 have been making a name for themselves with their explosive and adrenaline soaked performances. They’ve shared the stage with bands like The Dillinger Escape Plan, Street Sects, 3 Teeth and will soon be on tour with Korn and Alice In Chains this summer. Ho99o9 is the type of band that is needed at the moment. Just as things have gotten watered down by bands changing their style to match the atrociousness of groups like Imagine Dragons and Nickelback, Ho99o9 is the plague that is coming to rid us of all that garbage. I for one am very interested to see where this band goes and what sort of danger they bring back to the rock world. Ho99o9 is on the rise and rightfully so.
Ho9909- United States Of Horror: 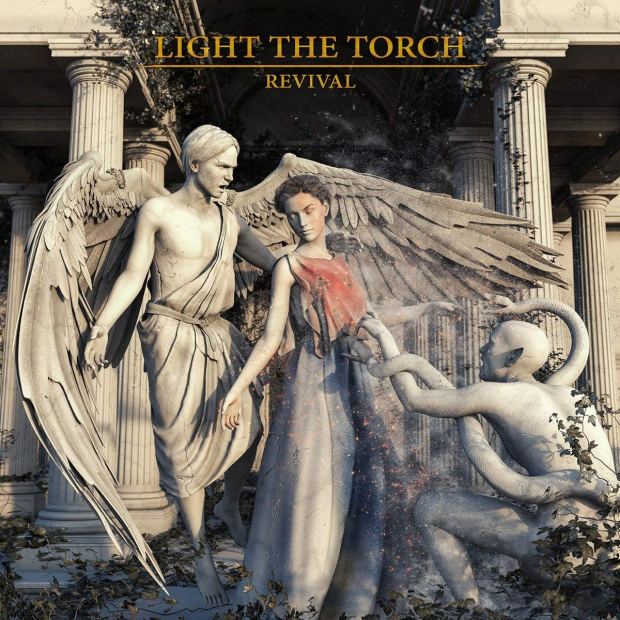 I’ve said it many times before and I stand by it, heavy music and melody go together like peanut butter and jelly. They both come from different places but when they are combined the end result is perfect. There is a band out right now that does melodic heavy music perfectly, and that band is Light The Torch. You might recognize them originally as Devil You Know but, due to a former band member causing some issues, the remaining members opted to change the name and continue on albeit on a slightly different path. The first two Devil You Know albums were more in that “djent” style but now with Light The Torch, they have gone more melodic without losing the “heavy.” Singer Howard Jones (formerly of Killswitch Engage) sounds great and just as good as he did on the Killswitch album The End Of Heartache. The riffs courtesy of guitarist Francisco Artusato aren’t over complicated, instead they have a really subtle ebb and flow of clean and distorted tones.

Their album Revival is exactly the type of melodic heavy record that you’d want to hear from this band and Howard. When you have songs like “Die Alone,” “Calm Before The Storm,” “Raise The Dead,” and “The Safety Of Disbelief,” it really shows a different side of each member and allows Howard to showcase his pure singing voice. Then you have a song like “The Sound Of Violence,” which sounds a bit like Howards pre-Killswitch band Blood Has Been Shed. Closing the album is “Judas Convention” which is a great summation of what the album has to offer.

Revival isn’t reinventing melodic heavy music but it sure gives it a shot in the arm. Having Howard Jones in this sort of shape both vocally and lyrically gives Light The Torch the guidance needed to really leave their mark on the scene. I’m just putting this out in the aether but, a Killswitch Engage/Light The Torch tour sure would make a lot of sense and would be HUGE!!