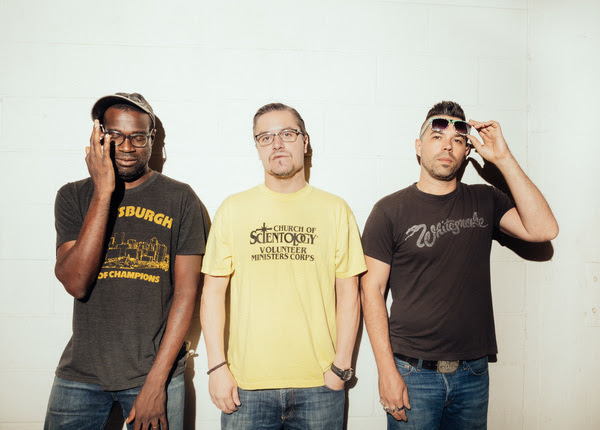 Mike Patton has been one of the most consistently busy frontmen/singers in music for the past 15 years. His projects from Faith No More, Tomahawk, Peeping Tom, Fantomas, etc have been fan favorites for many years. Now he has joined up with Tunde Adebimpe of TV On The Radio and Anticon Records founder Adam “Doseone” Drucker in a very adventurous and experimental project called Nevermen. Shockingly the groundwork for this group was started over 7 years ago, when Adebimpe and Drucker would get together and ” crank space heaters in a cold warehouse that was marked for demolition, pour whiskey, run tape and beat on everything from doors, pipes, floors, and chests. They jammed on keyboards and drum machines, fashioned poems from tour memories and newspaper stories. The material would then be chopped up and made into songs then sent to Patton.” Each song has something different to offer listeners. The 3 gents of this group add their own flavor to the songs all the while trying out things that would normally be out of their comfort zones. The sheer amount of talent that each posses is astounding, yet the album doesn’t quite live up to their previous accomplishments. The end result is an album that was created by three very talented individuals that wanted to try something for themselves. While there are some moments that shine for example the song “Tough Towns” has a cool trip-hop vibe and the slow, dramatic swell that emerges from the quiet hum of closer “Fame II the Wreckoning, which contains some introspective as to what holds the group together, “One day might you get to the flame of what you are.”

Nevermen is a group that still has a way to go until they find their “sound.” The die hard fans of Mike Patton will probably enjoy this, while the casual listener might get lost in what this is all about. I can say this though, it’s very refreshing to have people like these 3 guys go out on a limb and try to create something that is drenched in the attitude of we are doing this for our love of music and art. Nevermen isn’t trying to be something that it’s not.