I was originally going to make a giant list of the best debut albums of all time but, I thought doing an individual series would be more fun and frankly more interesting. There are zillions of great debut albums out there. Some of which are legendary and influential while others are just plain awesome. Some of you reading this might not agree with all the ones I pick and that’s ok. I just really want to showcase some great albums, some that you might have missed and some you probably haven’t listened to in a long time.

END_OF_DOCUMENT_TOKEN_TO_BE_REPLACED

I love it when a band melds their influences into something that stands out from what they were inspired by. Sure there might be moments when one of the influences comes through a bit more but, that just shows how much of an impact that band has on others. For the first band of the week of 2018 I’d like to introduce you to the band Vexes. Made up of former members of A Life Once Lost, Vessl, and Fury of Five, Vexes has come out with a fury of thunder. Vexes takes their love of Deftones, Cave In, Thrice, Helmet and Circa Survive to new heights. Their debut album Ancient Geometry is gearing up to me quite the debut. From the three songs released so far, “Lift,” “Plasticine,” and “Helion,” you can tell that Vexes is here to make and leave a lasting impact.

END_OF_DOCUMENT_TOKEN_TO_BE_REPLACED 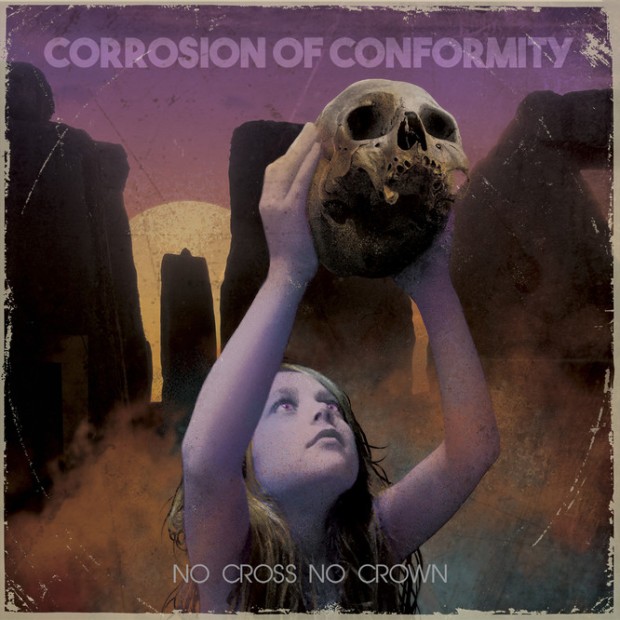 Comeback albums are quite difficult to make. When the band has been gone for a good amount of time, there is always a specific question that comes up. Does the band still have “it” to make a great album? Well in the case of Corrosion of Conformity, you bet your ass they do. The bands first new album with singer/guitarist Pepper Keenan back in the fold since 2005’s In The Arms Of God, is everything you’d want from the band and then some. Their new album No Cross No Crown is every bit a classic COC album but it’s fresh and full of rip roaring riffs and thunderous rhythms, not to mention some of the best vocal performances of Pepper’s career.

From the moment the instrumental intro “Novus Deus” begins, the feeling of epic awaits. “The Luddite” is one hell of a way to start things off. This song has Sabbath worship all over it with bits of a High On Fire vibe too. “Cast The First Stone” is one of those signature rip roaring songs that COC does best. There are so many songs on this new album that are badass that it’s hard to pin point an absolute favorite. I will tell you though that songs like “Wolf Named Crow,” “Forgive Me,” “Nothing Left To Say,” Old Disaster,” “E.L.M,” “No Cross No Crown,” and “A Quest To Believe (A Call To The Void),” are all outstanding songs. I would put money on these songs going over so well live, people would be clambering for a live album of the material from this album. Something else about this album that really stands out are the little interludes between songs. It really gives the album a real “album” feel, something that is definitely missing from a lot of bands these days. The album and band’s longtime producer John Custer really knows how to get the absolute best tones for all the guys in the band as well as making sure they deliver the best performances.

It’s all very refreshing to have this version of Corrosion Of Conformity back. The band originally started as a three piece way back during the beginnings of Hardcore Punk but in the late 80’s early 90’s shifted to more a heavy rock band with the inclusion of Pepper Keenan. Their legacy has never been questionable. They have delivered great album after great album, from Deliverance and Wiseblood to this new one. If you have not known about COC, or are rediscovering the band, No Cross No Crown is a great way to get into the band. Throughout listening you will find yourself grooving your head along to the rhythms and riffs. You might even break out into a sudden air guitar moment with how good the riffs are.

Thank you Corrosion Of Conformity for putting out a sheer contender for Album Of TheY Year, and it’s only January.

2017 brought us a slew of great albums. From the new Mastodon, With Our Arms To The Sun, Mutoid Man, Pallbearer, Converge and so many more.

2018 is shaping up to be quite a year for new music as well. The following bands are either releasing new music this year or are supposed to. Either way these are the most Anticipated Albums of 2018 (so far).

END_OF_DOCUMENT_TOKEN_TO_BE_REPLACED

2018 is upon us and Audioeclectica is going to be a little bit different this year. You will just have to keep reading to see what changes and what is to come.

For the first post of the year, I thought I would celebrate all the albums that are having major milestone anniversaries this year. The following albums are all hitting the 10, 15 20, 25, 30, 40 and 50 year marks. Some are absolutely legendary albums and others are just impactful albums that you and I would definitely consider to be great. While others are by bands that have had a lasting impact.